October is National Domestic Violence Awareness Month.  And with rates as high as 1 in 3 women and 1 in 7 men, chances are you know someone impacted by domestic violence.  It exists in every neighborhood in our community and does not discriminate based on gender, ethnicity, economic status, level of education or sexual orientation. 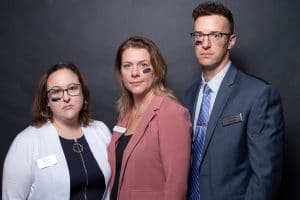 In Greene County, businesses and individuals join together in October to take a stand against an epidemic that impacts all of us.  The iCare Campaign is designed to raise awareness about domestic violence.  And awareness is the key to ending the epidemic.

The statistics are alarming.  According to the National Coalition Against Domestic Violence:

The National Domestic Violence Hotline defines domestic violence “as a pattern of behaviors used by one partner to maintain power and control over another partner in an intimate relationship. It can happen to anyone at any point in a relationship.” Domestic violence is not an isolated issue that only impacts a few. While the violence most often occurs at home, behind closed doors, the effects of domestic violence spread like a ripple outward into the community, impacting all of us.  The impact is often felt in schools, healthcare, law enforcement and the workplace.

The NCADV estimates that 1 in 15 children are exposed to intimate partner violence each year, and 90% of these children are eyewitnesses to the violence.  Children exposed to domestic violence can experience lifelong mental and physical effects.  A study conducted by Everytown found the physical and emotional toll of domestic violence also has an associated economic cost.  The combined cost of children’s exposure to domestic violence amounts to over $50,000 per child, adding up to over $55 billion annually for medical costs, social services, lost workplace productivity and criminal justice system involvement.

The Springfield Police Department reports handling about 3,000 domestic violence incidents every year.  Domestic abusers are not only dangerous for those being abused, they can be lethal for cops. In 2017, more officers were shot responding to domestic violence than any other type of firearm-related fatality, according to the National Law Enforcement Officers Memorial Fund. Domestic violence is considered the most deadly situation for a police officer to be involved in.

To join the iCare Campaign, contact Jared Alexander at 417-837-7700 or visit www.myharmonyhouse.org/icare/register-a-business

Established in 1976, Harmony House is Missouri’s oldest and largest domestic violence shelter and has served over 19,000 survivors of domestic violence since first opening its doors.  Our mission is to provide shelter, advocacy and education to survivors of domestic violence while promoting the principle that all individuals have the right to a life free of abuse.  Harmony House provides comprehensive services including: crisis hotline answered 24/7, emergency shelter; food, clothing and basic hygiene items; case management; court advocacy; on-site counseling; family advocacy; life skills classes; transportation assistance; and outreach services. For more information on Harmony House, please call 417-837-7700 or visit us online at www.myharmonyhouse.org