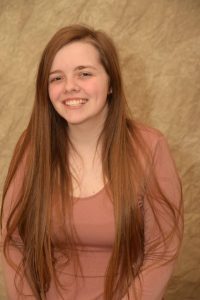 Saying that the club has positively affected me would be an understatement. The Club has changed me as a person. When I first started going to the Club, I was not in a good place; I had been bullied for a couple years. I would cry for hours and would say I was sick so my mom would not make me go to school. That day in February a few years ago, when I walked into the Club for the first time, I felt this weird feeling in the pit of my stomach —  a mixture of fright and euphoria. I saw all the kids inside smiling and laughing. I saw all these new people, and I was sure they would not like me.

The moment I told the lady my Club number was the moment my life changed.

I went into the game room almost every day — until there was a new lady at the front desk, Robin; she was the sweetest person I had ever met. I began to help her in the office every single day. I spent so much time in the office, although I would occasionally go back to the game room. I became a part of Junior Council and was the secretary, which later became my role in every leadership group I was part of. I finally started to feel safe again and even made new friends including Jason and Erika.

I was in sixth grade and things were going all right. The club was full of so many great people, it amazed me. I had only been there a year and it already felt like I had been there my whole life. I still remember the day I won Junior Youth of the Month and Jeff Long (staff member) gave me a shirt that said “Future Youth of the Year.” That shirt made me want to strive to be great so that way I could make Jeff and the other staff proud of me. I was finally a happy kid again, until the first day of seventh grade. I began getting bullied again, but I just ignored it because I knew I would have my safe place back soon enough. Little did I know that the girl who had been tormenting me on and off since third grade would invade that safe place. I got onto the bus the first day of the Club with a huge smile on my face and sat down in the front seat. My smile soon dropped when I saw her coming onto the bus. I had befriended her over the summer and took her on vacation but that did not matter to her. It was like none of that ever happened. I made a new friend that year named Caiden. Every day I would sit by him and we would talk about our days. When I was sad he would make me laugh. When I would cry he would wipe my tears. He became like a little brother to me and I told him everything.

I started spending time in the CAVE because Robin was scared that I was not socializing enough, where I began to finally fit in and find my place. I started going to Torch Club meetings. I finally did not care what other people said about me because I had found my place and no one was taking it from me. Whenever I had a problem John always knew; he always helped me when I needed it and since he was a staff member he could take care of the situation. He was not going to let anything happen to me. I got involved in the Club’s newscast which sparked my passion for journalism, but the best part was that my best friend was my co-host on the show.

The next two years flew by and suddenly I was a 14-year-old freshman at Parkview High School. This was the year that things finally started looking up for good. I was passionate about everything I did. There was this really cool staff member named Stan who had been there during the summer. I hosted the talent show with him and we quickly grew close. I was still in Torch Club and was now the President and Secretary. I continued helping out in the office. Erika and I were inseparable, you would never see us apart; we even got the chance to work there as coworkers. Then during the summer, with the help of Stan, we hosted the talent show as well as participated in it. We got to be goofy and silly. We made people laugh which was something truly inspiring. I remember walking out with our blue and pink hair teased to the perfect amount of messy and watching smiles grown on people’s faces as we were dressed in tutus and tank tops.

This year has been the best one yet. I went and sat with Stan every day in the little gym until Erika got there. One day Stan told me something I will never forget because it made me work harder at what I do. He said:

“If I had to pick a kid who truly defined the meaning of being a Club kid it would be you.”

This made me work harder. Stan left the club a couple months later but is still a big part of my life today. I joined Keystone, was the secretary, and got to be part of the National Conference. I got to be a part of the press pass team and got to share my experience with teens that did not get to come. Those three nights in Texas were the best nights of my life, because they were not spent with people who I saw just as friends, they were spent with my family. We made unforgettable memories and had uncontrollable laughs.

The Club to me is my family and my second home. Who knows if I would still be here had it not been for the Boys and Girls Club. I know I certainly would not be the person I am today had it not been for my experience at the Club. I am often asked during tours of the club what the best part is and my answer is the same every time

“The Club is a family; a crazy, goofy, dysfunctional family, but a family none-the-less.”

I graduate in two years and I promise you that my Club journey is not going to end there; I plan to work or at least volunteer here. The Club is a place where great futures begin and where a child grows. The Club is a garden and each kid is a seed to a flower, we are all different but we all come together in one place to create something truly beautiful.